On the 5th of April, 2018, during the Károli Community Days a field trip to Esztergom was organized by the Department of General Humanities. Erasmus students and Károli students applied for participation, and all in all 54 people, professors and students, gathered at the Western Railway Station on Thursday morning to take the 9 o’clock train to Esztergom.

We were supposed to meet at 8:40 under the great departures-arrivals panel and actually most of the group was already there before the appointed time. Then we headed to the train. The train trip was nice and eventless; people were talking and laughing, goofing around, some were reading magazines or books and after a while some of the Erasmus students started singing.

We arrived at around 10 o’clock at Esztergom railway station which is currently under renovation so we had to find our way around it to the street. We walked about 30-35 minutes on the streets of Esztergom towards the hill where the Royal Castle and the Basilica stand. (Due to the number of people in the group we spread out thin and probably caused a little problem for the drivers on the road but no one got lost or had any trouble.) 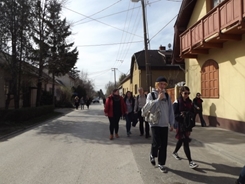 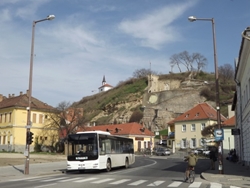 We climbed up to the entrance of the Royal Castle which was our first place to visit. Before we actually entered the museum we had to pack our bags, backpacks and coats into lockers (which was a mistake as I figured out later, because it was a little cold inside), then we passed by exhibitions to get to the knights’ hall where we received a thorough summary about the history of the castle. After the lecture we went to the back of the museum to see the remaining parts of the gate of the church which stood at the place of the Basilica in the 12th century. There was also a painting of the whole gate as it was described in written sources. Professor Zsombor Jékely gave us a profound lecture about it in Hungarian, which was translated to the Erasmus students by Miklós Vassányi. Then we went to see the replica of the crown on the gallery of the knight’s hall and a 12th century chapel on the other side of the building. We received another presentation by Prof. Jékely about the remnants of the paintings on the walls. After all this we had about 15 minutes left before we had to go to have lunch, so we went up to the top of the Castle to admire the view. Around 1 o’clock we gathered at the entrance to pick up our bags and coats, then we headed down. 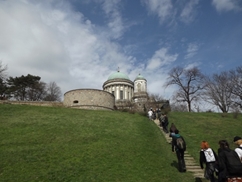 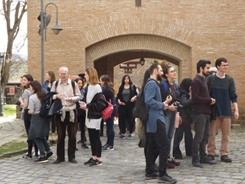 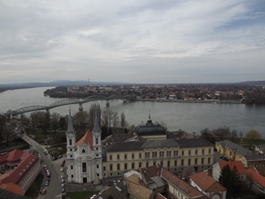 We had lunch at the Saint Adalbert Restaurant just down on the other side of the hill. Most people had the vegetarian menu which was fried cheese (“rántott sajt”) with rice. The rest of the group ate “Brassói aprópecsenye” with French fries. We left at a little past 2 o’clock and climbed up again this time to the Basilica which was our second stop.

More precisely the treasury of the Archbishopric. Inside, the professors said that we should divide into two smaller groups, one with the Erasmus students and one with the Hungarian students. This was for practical reasons, because in this way, both groups could have a proper guided tour. The group of the Erasmus students went straight to the treasury, while we remained within the halls of the Basilica. We were given a lecture about the history of the building and Bakócz Chapel. This took about 30 minutes, then we also went to the treasury. The treasury of the Archbishopric holds liturgical objects, mostly goldsmiths’ articles and fabrics. After the Treasury we went up to the top of the Basilica. At least one of the groups went up to the very top, the other one stopped at the panorama window and sat down for a little, some even had a coffee. 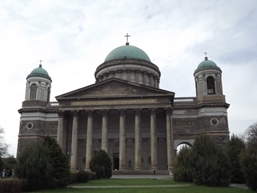 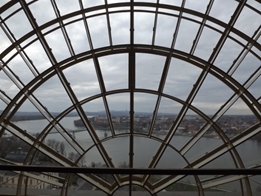 The entire group headed to the Christian Museum after leaving the building and started descending on a rather steep set of stairs on the hill behind the Basilica. We started the guided tour in the museum at around 4 o’clock. This is an art gallery which hosts Christian paintings and statues, the collections of János Simor, Arnold Ipolyi and the San Marco family. Soon the other group joined us inside, still separately. We got a ‘sped up tour’ because the museum was only open until 5 o’clock, but we managed to see the whole exhibition. 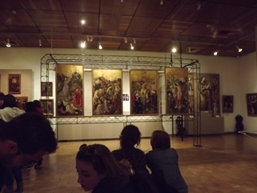 But when we came out it was too early to just go back to the railway station. So we suggested to have some ice cream on the way back. The group stopped at Múzeum Pastry Shop, where we surprised the shop assistant when we asked for 52 scoops of ice cream.

The train trip back to Budapest was quieter, everyone was tired. We received the course evaluation form about the trip, even the conductor asked for one, but she didn’t fill it out. We arrived at Western Railway Station at 19:58, said our goodbyes and returned home... looking out for the next field trip in the fall!